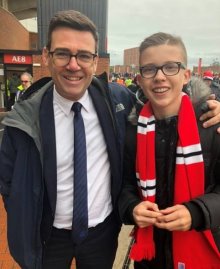 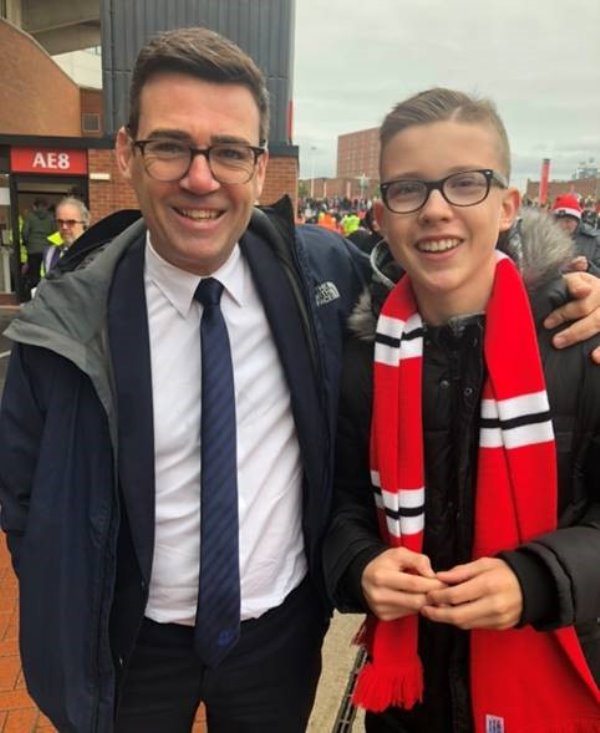 After a chance meeting at Old Trafford, Mayor of Greater Manchester Andy Burnham agreed to an interview with me to discuss his career in politics.

I asked what it was that inspired him to get involved in and led him to join the Labour Party at the age of 15. Andy spoke of the anger and frustration people in the North of England felt in the wake of the Hillsborough disaster and Margaret Thatcher’s reign in power: “You couldn’t escape politics in the 1980s as I grew up in Leigh, which was a mining area. The miner's strike was in the news, which was personal to me as I saw friends whose dads were in the mines.”

Andy added that he first saw the political ‘North v South’ divide in the late 1980s whilst he was attending Cambridge University: “When I arrived in Cambridge I could see this was a very different world, it seemed like there were two countries within one. The Hillsborough disaster happened during this time and this was something that was close to me. This took me from being interested in politics to being angered by it. It was all everybody spoke about at home but nobody even mentioned it at Cambridge.”

This isn’t the only time Andy mentions issues relating to current government policies such as devolution and Levelling Up.  He has been challenging the government to do more regarding devolution to help places like Greater Manchester: “Being from the North is why Levelling Up has always meant something to me, but the problem I have is that it’s not being properly delivered. The current situation is somewhat worse, as people are being promised things that are not being delivered.”

During Andy’s time in Gordon Brown’s Labour government in 2009 he attended the 20th anniversary of Hillsborough at Anfield and delivered a speech on the pitch at Liverpool’s ground, remembering the 96 lives lost. Andy told me of how he was unwilling to defend his government’s lack of action on Hillsborough and how he wanted to fight for justice.

During Andy’s time at the Department for Digital Culture, Media and Sport (DCMS), he created the UK City of Culture programme, which is something our home city has benefited from in recent times. I asked Andy why and how he created this and it all stemmed from a ‘London centric’ Westminster bubble.

He told me: “I went to work as Culture Secretary within a Whitehall department which couldn’t see beyond London and the Royal Opera House! As Liverpool was the European City of Culture at the time (in 2008) I said that I’d be spending my time there and I saw the positive impact it had.

Andy later told me how he worked with Phil Redmond, creator of  two iconic TV series - Brookside and Hollyoaks -  to set up the City of Culture in 2009. Redmond also helped in the development of Liverpool’s European City of Culture.

I pointed out to Andy how Coventry has greatly benefited from being City of Culture and he said: “It’s great to see the level of interest in Coventry and the overall impact that City of Culture has had on the city. To be honest, that is why I created it back in 2009. It rejuvenates through culture and music and I’m pleased to see the impact it has had.”

Following his time as Culture Secretary and then Health Secretary, Andy decided to run for Mayor of Manchester five years ago this month. I asked why he made this move.

“When you’re in the ‘Westminster bubble’ for such a long time, it’s difficult to make many changes. It is possible, but the ‘Westminster system’ is limited. It’s not set up to support Coventry or Manchester, so you’re fighting to get something but the system isn’t set up to support what you’re campaigning for. I was never part of the Westminster crowd and as I became more independent, the role of Mayor seemed more my thing”

Andy has had many highlights during his time as Mayor, and some saddening moments too.

It had only been a number of weeks since Andy became Mayor when the Manchester Arena Bombing attack took place, and Andy spoke of the unity Manchester showed after the disaster. It was poignant reflection for Andy given the fact it was almost five years to the day of the event when I interviewed him.

It is clear to see that Andy has achieved a great deal yet also many setbacks during his time in politics. As I drew the interview to a close, I asked Andy whether he would ever run for a third time to become the Labour leader, if the opportunity arose.

He told me: “I’m not going to rule it out. If it were possible one day, I wouldn’t say I wouldn’t want to. But not any time soon. It’s important that I finish what I’ve committed to here and that I stick to that. I’m not sitting here plotting how I get back to Westminster. If I were to go back one day, I think I’d be a much better politician from the experiences I’ve had as Mayor… the way I’d go back is if there was an appetite for real change down there.”

We will wait and see what the future holds for Andy Burnham. 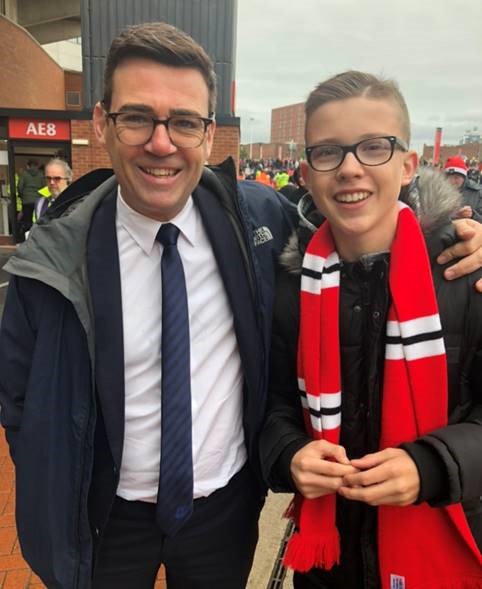