30th Year At The Edinburgh Fringe - (2) A Tremendous First Day For Sherlock! 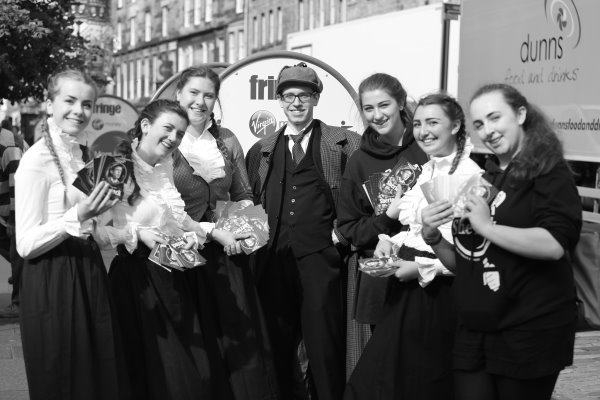 In the 30th consecutive year of Bablake's actors performing at the Edinburgh Fringe, the cast of 'Sherlock' should be absolutely delighted with its first performance at Greenside Venues' Lime Studio.

Commuters travelling into Edinburgh on the early train from Musselburgh were greeted by a sartorially elegant Sherlock Holmes, charming Victorian ladies and a human lamp shade; a bizarre scene for most cities in the UK, but in August a familiar sight for those witnessing the fascinating world of the Edinburgh Fringe! Those listening to Radio 2's Nicki Chapman show at 6.25am would have also heard mention of the 30 year run at the Fringe and a reflection that Bablake "must be a very good school" for this to have happened.

Bablake's cast for 'Sherlock', written and directed this week by former pupil Sam Griffiths, gathered outside Lime Studio in Nicolson Square at 7am - yes! - ready for its tech rehearsal. Pleasantly surprised by the generous space of the studio, all went well in the capable hands of Greenhouse Family technician Jake, who was professional, encouraging and very impressed with the Bablake play.

After a short meeting and late breakfast, the next project was for the cast to head to Edinburgh's Royal Mile to flyer the play. This is where our cast's adrenaline took over and impromptu scenes from the play were presented to the eager public.

The first performance drew an audience of just under two dozen, a very good 'draw' for the premiere of 'Sherlock'. Members of staff accompanying the cast were delighted with the standard of the show which was nigh flawless.

Being at Edinburgh is not just about performing and after the first show, our actors were able to do more flyering and see a number of other shows.

Our school's 30th year at the Fringe has definitely begun in a very positive way and the whole company should feel very proud for its contribution to Bablake's fine dramatic legacy.

We will have reports from the students, staff and former pupils involved with Sherlock and the 30 years over the next few days.